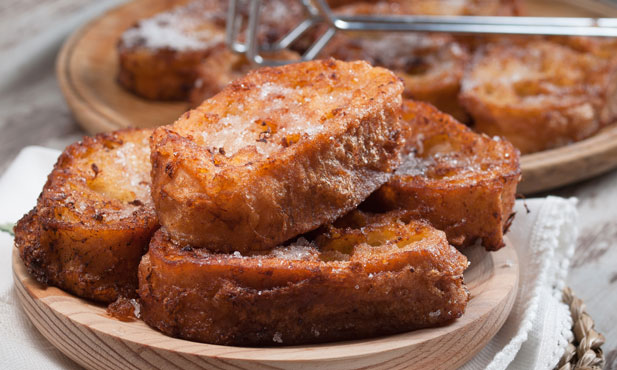 In a pan bring half of the milk, the lemon peel, cinnamon stick and the three tablespoons of sugar to the heat. Stir and let it warm for ten minutes on a low heat.

After ten minutes remove the cinnamon stick and the lemon peels. Turn of the heat and stir and add the remaining milk. Let it stand until the milk is cold.

On a soup plate put the milk and put one slice of bread and turn it. Repeat for all the slices of bread.

On a soup plate put the eggs and beat them. Put the slices of bread in the beaten eggs and turn them.

In a frying pan put the oil to heat, put the slice of bread and leave for five. Remove when the slices of bread are golden brown.

In a plate put the sugar with cinnamon powder and turn the golden slices into this mixture.

Put on the plate or platter with absorbent paper and it is ready to serve.