In my bedroom, I study, get dressed, watch TV, play games and I surf the internet.

It was decorated when I was 9 years old, that’s why it is a little childish.

This year I’m going to buy new furniture for the room. It’ll be a new world!

In my actual room I have a desk, a bed, a rug, a bookcase, a sofa and 1 million photographs!

I love my bedroom, but the time of change has come. 😀 My bedroom is big. My television is in a tall place. On my desk I have a photo of my sister and me, and a computer. My bed is comfortable and nice. I have a mirror where I get ready for school. My wardrobe is big. In my bedroom I have my piano and my guitar. I have two windows and one with a balcony. My room is a place where I spend my free time. 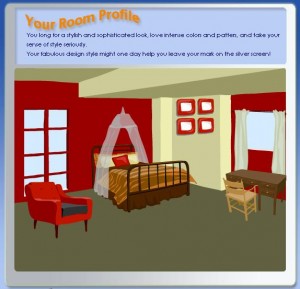 My room is modern and medium. It has a big and comfortable bed, where I sleep and dream a lot. On the desk I have pictures and books.

My room has a television where I can see my favourite programmes and films. My wardrobe is big and I keep there my clothes and my bags.

There are two windows where I can see my small village.

My room is the place in the house where I spend the most time and the place that I like the most.

A famous person I would like to meet is Selena Gomez because I am a big fan. I like the her music, she’s a very good actor, I like singing her music and she is very beautiful.

Something I’m planning to buy in the future is a chinchilla because it’s very cute.

Since I was a child I’ve dreamt about it. I love planes, I love to fly, I love to travel, I love this!

I’ve always  dreamed of spending the day flying, but the truth is that this is impossible.

I could have good marks, but it would still be impossible..

Two years ago I went to the ophthalmologist and he detected a disease called myopia, a disease which ended my dreams..

At the time I was really annoyed because a disease ended my dreams, all my dreams.. But today I’m happy, I’m content!

Next Saturday my friend and I are going to have lunch and after that we’re going to the cinema. We both love films and popcorn.

I haven’t seen her in 2 months and I miss her.

After going to the cinema, we ‘re going to shop and buy new clothes for the summer.

On Sunday I’m going to the beachwith my parents and my sister. I hope the weather is good and sunny because I want to get a tan.

I think it’s going to be a nice week because I’m going with my family and my friends.

I’d like to meet Beyoncé because she is fantastic. I’ve seen some of her video  concerts and they are perfect. I love Beyoncé and I’d love to meet her and find out what she’s like . She is my idol and my hero. I’m a big fan. I know all her music. Her music is fantastic. Her voice is brilliant and perfect.  I’d like her to come to Portugal. Seeing her concert is one of my dream.  I first listened to her music four years ago and I was impressed. I love Beyoncé!

A football club beginning with R

A football player playing for Inter Milan beginning with S

A capital city beginning with T

A Portuguese football coach beginning with U

A football club of the Premier League beginning with W

The best player in the world in 2006 beginning with Z

By Diogo and Nuno (post-elementary)

A month beginning with J.

A country in Africa beginning with K.

A drink beginning with L.

A food beginning with M.

An accessory beginning  with N.

A country beginning with O.

A country beginning with P.

A country  beginning with Q.

A fruit beginning with A

A sport beginning with B

A transport beginning with C

A river in Hungary beginning with D

A country in Europe beginning with E

A part of the body beginning with F

A type of style beginning with H

A country beginning with I

( By Carolina and Francisca )

Peter and John are brothers. Anna is Peter’s daughter and Peter is a farmer.

One day, John and Anna went London. When they arrived, they were visiting Big Ben and after the London Eye. The weather was bad and it was raining a lot. The sky was grey.

They were playing and looking at Big Ben and the river when suddenly, something happened… The London Eye stopped.

And now? What could they do?

While the London Eye wasn’t working, everyone was playing games and all the children were crying.

Five hours later, a man appeared and after a lot of work and sweat, he managed to get them off the London Eye.

Anna was happy, but John wasn’t because he didn’t like the experience. They went home.

When they arrived, they told John their adventure. Peter was happy because their family was ok and because the fright went away.

(By Carolina, Francisca and Diogo )

In Paris there was a family who won the Euromillions and went home to celebrate.

At home they drank wine and the next day they went buy a new car.

At night, they went to the Eiffel Tower to celebrate the new car and drink a lot of wine. While they were driving home they saw a tarantula on the steering wheel. They are so scared that the car crashed into a lamp post.

Then they were taken to hospital to cure injury.

And back to home everybody was cured.

Last week I went to Paris.

My weekend was fantastic.

My Saturday was fantastic. I went to Fátima and Óbidos. Fátima  and Óbidos are very  important  cities for our religion and these cities are fantastic.

My Sunday was fantastic. I went to my godmother’s house. It was really fun. My godmother has two dogs, one cat and one turtle. I love my godmother.

Well, this was my weekend.